where have we been?

well, we passed the first two weeks and then passed the second two weeks so by the middle of january, we were officially off the insulin medicine and have grown out of that diagnosis. we only have to test his blood sugar if we feel there is an issue.

well, what’s happened since then? follow ups at endocrine show steady levels and only needing to return in 6 months instead of every 3. we also had a trip to the neurologist to address concerns with his head circumference. he is in the 1st percentile for head size which is a concern for continued brain development and head growth. his soft spots are around a millimeter large (or small) but his plates haven’t fused so we are okay for now. we will return in 6 months for a follow up and possibly an MRI to determine any further intervention at that time. the neurologist referred us to a developmental therapist and to see the genetics team. tuesday, we saw the developmental and occupational therapist and have had BBA evaluated for where he could use some extra support. we’ve known that he could be falling behind and didn’t want to set him back. from talking to the team, most of his issues seem to stem from being too toned (without strength) and not being able to release his hands, arms, legs, etc. because they are too tight. in a few weeks, we will have a full plan and staff to work with him, all provided for free by the state.

then it’s to genetics. appointments have been set up in may and we will be, more than likely, getting some genetic testing to see if there is a condition that may link together his issues.

it’s been a windy road to get this far and we can see him making strides each day. now, it’s just important to get him the specialized help he needs to be back on track.

they mentioned that he is atypical (b says an odd duck). well, the good thing is unusual and uncommon things run in the family. i mean, just look at his dad. 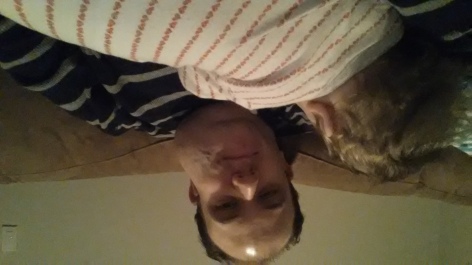 it’s hard not to enjoy the special quiet moments even more than before. either with BBA, BBB, or @littlepund who clearly runs the house nowadays.