why should i care about iowa?

and by iowa, i mean the iowa straw poll. 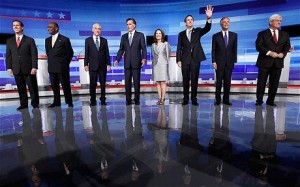 the next presidential election is over a year away. a year and 3 months away from when we need to decide about the next president. the candidates are going to continue to change until it counts. why don’t we spend some time fixing the things we need in the next year and 3 months. perhaps we could work on the debt situation and actually get a real solution, like not continuously spending more money than we have and just suggesting that we raise taxes to make up for it. that’s not going to work. perhaps we could work on dealing with the multiple wars we are involved in. perhaps we could work on things that are other real issues here at home like, oh say, maybe the economy. come to think of it, weren’t these all the things that president obama said he was going to work on or fix when he became president?

here we are 3 years later and in a worst place than we were before and everyone is just pointing at each other and/or still trying to blame President Bush or the Tea Party. we, the united states of america, haven’t had a budget in probably 850 days or more. just think if in every day of your life you just spent whatever you wanted and had no accountability for it? i really feel bad for all those democrats that got duped into believing in the hope and change because as you and i have both seen, it is just more of the same. let’s fix some of the issues and then decide who should be president because at this point no one in congress or the white house is looking like a good option.