food review: always up for pizza

for the last couple of weeks, we’ve been trying to go to coal fire over off of 108. we have been several times and always enjoy it but the last few times we went over there, the wait was over 30 minutes so when we called last night and it was already 25 minutes at 615, we decided to pass. we had decided we were going to go to chicago uno and swing by LL Bean afterwards. bee’s coat got screwed up so she wanted to see if they would fix it. as we left the house, I suggested we try Luna Bella in the hickory ridge village center. we always see it when we go to that village center and hadn’t ever been so we figured now was the time. 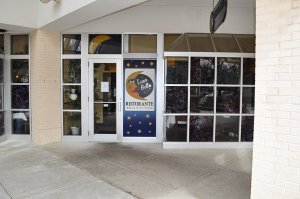 the restaurant is a small and intimate italian place that serves brick oven pizza. it was voted as one of howard county’s best in 2011 for pizza and italian so I was excited to try their brick oven style. after waiting more than the estimated 25 minutes, we finally got seated. I figured it was worth waiting to spend money at a local small business instead of a chain place and the place and line were packed. I saw someone from work who decided to not wait as several others did as well. there were also plenty of people getting carry out.

we started with the fried mozzarella which was a nice size appetizer. it could easily be for 3 or 4, but we just split it for ourselves. haha. bee got the eggplant parmesan and she enjoyed it. I, on the other hand, went for the main attraction, pizza. I’m always one for a meat pizza and went with the Pizza Carne. a nice blend of pepperoni, sausage, salami, and canadian bacon. the crust was a little thicker than I expected for brick oven pizza but it was crispy and held all the toppings nicely. they offer their pizzas in 10 or 12 inch and have several prepaid options as well as the choose your own toppings. the gourmet options as they refer to them had a nice variety and also looked tasty. our friend, steve, pointed out that the pizza finito is also real good. meanwhile, the build your own toppings seemed endless. anyway, the pizza and toppings on the pizza carne worked wonders together and i ate the whole thing!

howchow did a post on luna bella a few years ago and had different thoughts on the crust but my experience was that it held up well.

we certainly enjoyed it and will be back to try the other pizzas and menu options. afterwards, we stumbled over to the meadows original frozen custard. it’s a franchised ice cream place but the proprietor of this one is a fantastic guy. we walked in at 810 and they were actually closed, but “since they were there, they were open.” the frozen custard is made fresh daily and they only make select flavors each day so you know it will be good. we ended up getting a cookies and cream ice cream sandwich, which we split since it was pretty large for just $4. well worth it. we’ve been several times and have their club card. if you are looking for a new ice cream place, check it out!

2 responses to “food review: always up for pizza”