These are two completely different food reviews, but I decided to post them together.

If you are from Maryland and you don’t know about pit beef or don’t like it, it’s a shame. Oakey’s is a little pit beef and sandwich place in @EllicottCity and it’s definitely tasty. They do a good pit beef, probably not the best but it’s pretty good. You don’t get a lot of char on the meet, but you do get a nice juicy sandwich. It’s also a large sandwich. They also have pit ham, turkey, burgers, wings, etc. Lastly they also do a great hand cut french fry. Try some ranch dressing on them! @howchowblog did a review of a few years ago as well. Worth a visit if you are looking for a local pit beef place besides The Canopy. If you buy a shirt, Steve will give you $0.50 off your fries!

Salads… I enjoy a salad like most, but if there is one salad I can’t stand, it’s a spinach salad with walnuts, goat cheese, apples, and a raspberry vinegarette dressing. There are about 8 things wrong with this salad, but I tell you this because my buddy had us over for dinner and I got a text before that said, “do you like walnuts?” Well, I instantly knew they were serving this salad. Their’s had oranges and beets. I didn’t know it could get worse, but it did. Glad I refused to eat it. So to wrap up, if you invite me over for dinner, do not try and serve me this salad. Worst. Salad. Ever. In my humble opinion of course!

etiquette is something people seem to take for granted today. unfortunately, that doesn’t help us get further along in life. as someone who intentionally goes to early movies to avoid large, rude crowds at the theaters, i was pretty upset last week by the occurrence that happened.

i get that you might forget to turn your phone to vibrate or maybe you missed the reminder at the beginning of the movie. you were probably loading up with a large popcorn with extra butter and salt, but in today’s day and age, just keep your phone on vibrate any time you are in public. a) we don’t care how important you think you are and b) if you are so important that you have to answer the phone during the movie, don’t go into the movie in the first place. plain and simple.

lastly, if the theater is nearly empty, don’t sit next to, behind, or in front of me! there are another 200 seats, sit more than 2 feet from the other 12 people there.

apparently common courtesy and etiquette are not important any more. maybe the next time i’ll complain to the manager on the old ladies and then they’ll get the message because “sshhhh”-ing them didn’t work. don’t talk, sit next to me, or answer your phone when i’m in the theater. they should know this is normal etiquette and common courtesy. idiots.

do you guys agree? 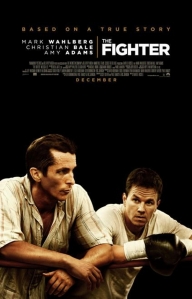 generally on friday’s that i have off from work, i try to make it to an early/mid-afternoon showing at the theater. this past friday, i went and caught “The Fighter” with Mark Wahlberg and Christian Bale.  the story is based on the true story of Micky Ward and Dick Ekland. Ekland was a famous fighter for knocking out Sugar Ray Leonard, whereas, his little brother, Ward, is working to make his way to the top of the boxing world and will eventually go on to be a boxing champion. the movie has received many nominations for the Golden Globes and will do the same for the Oscars. both Wahlberg and Bale are outstanding in their roles, but in my opinion, Bale really shines and stands out as playing the crack addicted Ekland, who has everyone in his family believing HBO is making a documentary about his comeback. at times, he even believes it himself and is later disappointed when the shows airs on TV. the way Bale acts and moves in the movie, you can see he really got into his role as Ekland. Wahlberg, who plays the leading role of Ward, also shines as the hopeful boxer, who struggles in life with the realities of dealing with his brother and his family, who pushes him into a fight because his mother needs the money, while trying to make something of himself.

the ensemble casts also includes Amy Adams, who portrays Wahlberg’s bar-tending girlfriend, Charlene, really rounds out the hopeful side that Wahlberg shows as his character tries to break out from his family and the small town of Lowell, MA. Mickey O’Keefe, Jack McGee, and Melissa Leo help round out the cast and are the 3 other pivotal characters in the movie. The last main character of the movie is the sleepy town of Lowell, Massachusetts. this small town that has nothing more than Ward and Ekland to hang their hat on shows why the brothers are the way they are as well as their family in general. it shows where people were in the the late ’80s and ’90s, how they got stuck there in many parts of America, and how drugs affected even the small towns across the country.

the movie is nominated for several awards and definitely deserves it. it stands out a fantastic portrayal of a true story and is way more than just another sports or boxing movie. i would give a 3.5 out of 4 stars. go find out for yourself why Micky Ward and Dick Ekland are the “Pride of Lowell.”